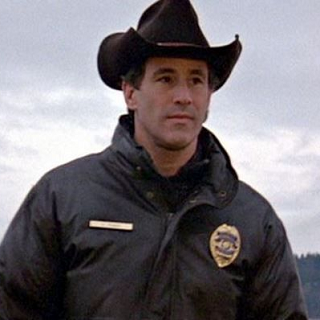 “So, what did this giant sound like, huh? I mean, did he have a big, booming voice or what?”

In 1989 Harry Truman is the sheriff of Twin Peaks. A year, in which he assists FBI Agent Dale Cooper with the murder investigation of Laura Palmer. As a result, Sheriff Truman and Cooper become close friends.

Sheriff Truman is just, loyal and decent. He and his brother are true men, as the Log Lady puts it. Harry has just one weakness: he is not always in control of his emotions. His love for the town gets Harry Truman easily offended by the very outspoken FBI Agent Albert Rosenfield’s remarks about the people of Twin Peaks.

It even escalates to Albert Rosenfield being punched in the face by Sheriff Truman when Albert refuses to release Laura Palmer’s body at the day of the funeral. Harry launches at Albert for a second time when Albert suggests to “practice walking without dragging his knuckles on the floor” but is caught off guard with Albert’s sudden confession of love.

“I love you, Sheriff Truman.”

Harry Truman went to Twin Peaks High School and completed his education at Washington State College. Because he is born and raised in Twin Peaks, Harry Truman knows all about the people of Twin Peaks’ lifestyles, making him a better law officer.

Sheriff Truman is compassionate and finds the right thing to say in any situation. He manages to calm down Bobby Briggs at Laura’s funeral and knows how to discuss the sensitive topic of Laura’s murder with her parents. Harry Truman displays the same compassion and understanding during Leland Palmer’s arrest for the murder of Jacques Renault.

Little does Sheriff Truman know, but Josie is not as innocent as she looks. She’s involved in intrigues surrounding the ownership of the Packard lands, that she inherited after her husband Andrew Packard’s suspicious death.

Harry Truman’s tough exterior is completely shattered when Josie Packard dies. He is devastated and begins to drink, unable to cope with Josie’s death and what he has discovered about her. It is Agent Cooper who steps in and knows how to calm down Harry.

Sheriff Truman is shocked to see that the corpse found on the morning of February 24, 1989 is none other than Laura Palmer, Twin Peaks High School’s Homecoming Queen.

At the Calhoun Memorial Hospital, Harry meets with FBI Special Agent Dale Cooper, who takes over the murder investigation. Next to Agent Cooper, Sheriff Truman soon begins to feel ‘like Dr. Watson’. Harry does not enjoy being left out of the loop and feels very uncomfortable when he doesn’t know ‘what the hell’ is going on.

Agent Cooper immediately trusts Sheriff Truman and informs him about murder victim Teresa Banks a year prior when finding a piece of paper bearing the letter “R” under one of Laura’s fingernails, a hallmark of the murderer it seems.

Despite Cooper’s unconventional investigation methods, Sheriff Truman is willing to accept Cooper’s judgment. Even when Agent Cooper decides to throw rocks at a bottle to determine which individual with the initial ‘J’ Laura was referring to in her diary, Sheriff Truman blindly follows, reading off the names and mentioning their connection to Laura.

The rock for Lawrence Jacoby knocked over the bottle but did not break it. The bottle eventually broke when the rock for Leo Johnson was thrown, leaving Sheriff Truman wondering how to interprete the difference.

Harry Truman goes along with Agent Cooper further than he himself might have expected. It’s only when the physical evidence against Benjamin Horne piles up, Sheriff Truman takes a stand against Agent Cooper.

“I’ve had enough of the dreams, the visions, the dwarfs, the giants.”

The Bookhouse boys fight the evil in the woods. When Cooper needs someone to fly wingman on his mission to rescue Audrey Horne, he calls for help from the Bookhouse Boys. It’s Harry Truman who steps in and accompanies Cooper to One Eyed Jacks.

Sheriff Truman can’t believe his eyes when he sees Cooper disappear behind red curtains in the woods. He waits hours and hours for Agent Cooper and Annie Blackburne to return from the Black Lodge, never leaving Glastonbury Grove.

Harry has Lucy Moran prepare fresh coffee and set out arrangements of donuts to motivate his men. As a receptionist she sometimes gets on Sheriff Truman’s nerves when listening in on phone calls or when being too exhaustive in her communication.

Deputy Hawk is Sheriff Truman’s most dependable deputy. He is referred to as “Hawk” because of his excellent tracking skills. When he secretly follows them on their rescue mission to One Eyed Jacks, deputy Hawk saves both Agent Cooper’s and Sheriff Truman’s lifes.

“I give up. Why are you whittling?”

“Albert! Let’s talk about knuckles. The last time I knocked you down, I felt bad about it, the next time’s gonna be a real pleasure.”

“So, what did this giant sound like, huh? I mean, did he have a big, booming voice or what?””

“There’s a sort of evil out there. Something very, very strange in these old woods.”

“Ben Horne, you are under arrest for the murder of Laura Palmer.”