“One day my log will have something to say about this.”

By the time of Laura Palmer’s murder, the Log Lady is a well-known town figure in Twin Peaks. She always carries with her a small log, with which she seems to have a psychic connection.

Many in town regard her as crazy but Margaret Lanterman doesn’t care. She likes to tell people what her log sees.

At the age of seven, Margaret Coulson disappeard during a trip in Twin Peaks’ woods with classmates Carl Rodd and Alan Traherne.

On September 9, 1947 Margaret was seen by a physician who noted no physical complaints except hunger and a seemingly unquenchable thirst. No symptoms of exposure after a night in the woods. No visible injuries or wounds except a pattern of raised skin on the back of her right knee. 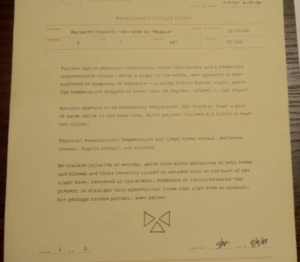 Her husband died in a fire

The Log Lady’s husband was Sam Lanterman, a lumberjack who died in a fire on their wedding night. “He met the devil” according to Margaret Lanterman.

Some time before he died, Margaret’s husband brought home a jar of mysterious oil after a trip to Glastonbury Grove. The Log Lady’s husband claimed it was an “opening to a gateway”.

Although agent Cooper is sceptical at first, he soon gets interested in what Margaret’s log might have to tell. He and Sheriff Truman meet the Log Lady in her cabin home, not far from Jacques Renault’s wood cabin.

She tells agent cooper that, on the night of Laura’s death, her log witnessed two men and two girls approaching Jacques Renault’s cabin. Darkness, laughter, owls flying, two men, two girls, flashlights in the woods over the ridge, quiet and then the footsteps of a man. And then, not long after, the screams of a girl further up over the ridge.

The Log Lady tells Major Briggs to deliver the message after the read out of his deep space monitors surpisingly showed: “The owls are not what they seem. Cooper… Cooper.”

On the night of the arrest of Benjamin Horne, the Log Lady tells agent Cooper “there are owls in the Roadhouse”. She joins agent Cooper and Sheriff Truman to the Roadhouse where Cooper has a vision of the giant telling him “it is happening again”.

“One day my log will have something to say about this. My log saw something that night.”

“He met the devil. The devil took the form of fire. Fire is the devil hiding like a coward in the smoke.”

“This cherry pie is a miracle.”

“I carry a log — yes. Is it funny to you? It is not to me. Behind all things are reasons. Reasons can even explain the absurd.”

“When this kind of fire starts, it is very hard to put out. The tender boughs of innocence burn first, and the wind rises, and then all goodness is in jeopardy.”