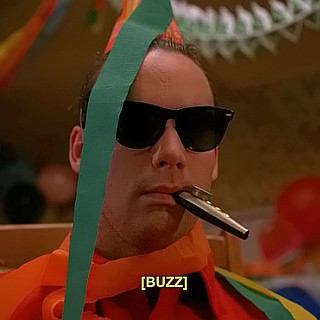 “A man needs a clean house.”

Leo Johnson is not a nice man. Leo is a trucker who also traffics drugs over the Canadian border for distribution in Twin Peaks. He gets his drugs delivered by the Renault brothers.

[Bobby Briggs] “Leo Johnson, are you telling me there’s no Santa Claus?”

Leo is the supplier of Bobby Briggs and Mike Nelson who distribute the cocaine among Twin Peaks’ High School kids.

Although Leo is not that discrete driving his red Corvette, Sheriff Truman has never been able to obtain any evidence against Leo.

Leo Johnson is a primary suspect in the murder of Laura Palmer since he was one of Laura’s regular sexual partners. Leo Johnson and Jacques Renault had sex with Laura on the night she died.

Leo’s wife Shelly finds a bloody shirt the day after Laura’s death. The same plastic that Laura’s dead body was wrapped in is seen in Leo’s house that’s being renovated.

Just before he gets shot by Leo, Waldo the myna bird who witnessed Leo and Jacques’ SM party with Laura and Ronette cries out: “Leo no! Leo no!”

Leo Johnson and his wife Shelly

“You smoke one brand of cigarettes from now on, because if I ever see two different brands of cigarettes in this house again I’m gonna snap your neck like a twig.”

After Shelly Johnson gets a beating from Leo, Bobby Briggs arranges a gun so she can protect herself. The next time Leo Johnson raises his hands on Shelly, she takes out the gun and shoots him.

Leo manages to run away. Only slightly wounded he spies on Shelly and discovers Bobby is the one she’s having an affair with.

In revenge Leo ties Shelly up inside the Packard saw mill shortly before setting it on fire. Without the help of Catherine Martell, Shelly would have died in the fire.

When Leo returns home after setting fire to the mill, Bobby Briggs has entered his house looking for Shelly. Leo raises an axe on Bobby but gets shot by Hank Jennings.

Leo survives the gun attack but ends up mentally and physically disabled. Shelly and Bobby decide to care for Leo at home. They get back at Leo by making love on the kitchen table with Leo in his wheelchair as a spectator.

Leo seems to regain his speech a little though his vocabulary is limited to expressing an obsession with new shoes.

Later Leo Johnson awakes and attacks his wife Shelly but Bobby manages to save her. With a wounded leg Leo rushes into the woods.

After having been kidnapped Major Briggs meets Leo Johnson who then lives in a cabin down the woods with Windom Earle who has conditioned him into an obedient servant.

When Leo Johnson partly regains mental capacity he believes Windom Earle is after his wife Shelly. Leo Johnson frees Major Briggs and says the last words that have been heard from him: “Save Shelly!”

“This is where we live Shelly!”

“There’s two things, Shelly. When I come home this house should be clean. And I mean clean. Number two, you smoke one brand of cigarettes from now on, because if I ever see two different brands of cigarettes in this house again I’m gonna snap your neck like a twig.”

“You punks owe me ten grand. Leo needs a new pair of shoes!”

“Wanna know about problems? You’re on the road… Driving back and forth. Gone for days. You get back and guess what… you find out your old lady has been giving it away.”

“A man needs a clean house.”

“The first thing you‘re gonna learn is have a good attitude …that’s key. Anybody‘ll tell you that!”

From Diane’s file on Leo Johnson