“I feel like I know her but sometimes my arms bend back.”

Laura was her school’s Homecoming Queen and the darling of her parents, Sarah and Leland Palmer. She volunteered at the Double R Dinner’s Meals on Wheels program delivering meals to sick and old people.

After her death, it is revealed that Laura Palmer led a double life…

The secret diary of Laura Palmer

Laura Palmer kept several diaries. One of her diaries she tried to keep secret by handing it over to Harold Smith a few days before she died.

The secret diary of Laura Palmer has many references to early-age child abuse by a mystery man called BOB.

Laura is a tortured soul harbouring dark secrets. Around those secrets she built a fortress that Dr Jacoby, the psychiatrist she secretly visited, was unable to penetrate.

She was a wild girl driven by dark forces that made her do bad things. She was sexual active from an early age and intrigued by how easy it is to control men.

She was using cocaine and, briefly, worked as a prostitute at One Eyed Jacks, a casino a few miles north of the Canadian border.

The town of Twin Peaks is shocked when on February 24, 1989 Laura Palmer’s dead body is found near Washington`s Wind River wrapped in plastic.

The brutal murder of this seventeen-year old, well-known and loved high school girl touches every one who knew her.

While examining Laura Palmer’s dead body, special agent Dale Cooper finds a tiny paper with the letter R under her ring finger’s nail. This makes him believe Laura has been the victim of the same murderer of Theresa Banks, another young girl who died about a year before in a town called Deer Meadow.

Autopsy also reveals that at the night of her death, Laura Palmer had sexual intercourse with three men.

There are several suspects among the Twin Peaks’ citizens. First of all, there is her boyfriend Bobby Briggs. He didn’t show up for football practice the day Laura’s body was found.

Her secret boyfriend James Hurley has the other half of the necklace she wore the night of her death. It seems he’s the last person who has seen Laura Palmer alive before, as he declares to agent Cooper, she jumped off his motorbike and disappeared into the woods.

Dr Jacoby seems to be hiding important information, things Laura told him during therapy sessions. He stole the necklace and he doesn’t turn over to the police the audio tape that Laura recorded.

Leo Johnson’s wife finds a bloody shirt in his truck the day after Laura died. Waldo, the myna bird that might have witnessed Laura’s killing repeats the words: “Leo no, Leo no!”

Donna Hayward might have been jealous of Laura as she looked up to her and falls in love with James Hurley after Laura’s death. While visiting Laura’s grave Donna cries out: “I wanted so much to be like you. To have your strength and your courage, but look what it did, look what it did to you, Laura. As much as I loved you, Laura, most of the time we were trying to solve your problems, and you know what, we still are. Not James’ or mine, or Maddy’s, yours. You’re dead, but your problems are still hanging around. It’s like they didn’t bury you deep enough.”

Audrey Horne might have been jealous of Laura because she got lots of attention from her father Benjamin Horne.

Benjamin Horne was sleeping with Laura when she worked as a prostitute at One Eyed Jacks.

Harold Smith seems pretty nice but he’s kind of an oddball. It’s unclear whether he was sleeping Laura.

In Laura’s secret diary there are many references to a BOB. It’s unclear whether this person is real or a figment of her imagination. She refers to BOB as a friend of her father. Laura describes BOB as a demonic figure who abuses and terrorizes her since her childhood.

“I think a couple of times he’s tried to kill me. But guess what? As you know, I sure got off on it.”

Officially she was involved with Bobby Briggs, the high school football team captain. She had a secret boyfriend, the quiet Harley-driving James Hurley.

Boyfriend Bobby Briggs was clearly no match for the far more sexually experienced and controlling Laura Palmer. She got him to deal cocaine so she could have it for free.

Laura’s secret lover James Hurley unsuccessfully tried to stop her from using cocaine. At the night of her death she jumped of James’ motorbike at Sparkwood and 21, cried out “I love you James” and ran into the woods.

Laura seemed to have a “bad influence” on her best friend Donna Hayward. She got Donna to smoke cigarettes and was responsible for Donna’s first experiences with the opposite sex. Laura cared about her best friend though and in the end she always tried to protect her.

Ronette Pulaski was there the night Laura was murdered. They were colleagues at One Eyed Jacks.

While working for the “Meals on Wheals” program, Laura met Harold Smith, a young man who fears leaving his home and lives of the stories people share with him. Laura Palmer feels she can trust him with her stories.

“Actually, I’m in kind of a weird mood. God, James is sweet, but he’s so dumb, and right now I can only take so much of sweet.”
From a tape she made for Dr Jacoby

““Hey, remember that mystery man I told you about? Well, if I tell you his name then you’re gonna be in trouble. He wouldn’t be such a mystery man anymore but you might be history, man.”
From a tape she made for Dr Jacoby

““I think a couple of times he’s tried to kill me. But guess what? As you know, I sure got off on it. Hmm, isn’t sex weird? This guy can really light my F-I-R-E as in red corvette. Uh-oh, here comes mom with milk and cookies.”
From a tape she made for Dr Jacoby

““I feel like I know her but sometimes my arms bend back.”
Laura Palmer in red room

““I just feel that sometimes I am better company only to myself, because of what is happening in my life, than I am or would be to anyone else.”
From the secret diary of Laura Palmer

From Diane’s file on Laura Palmer 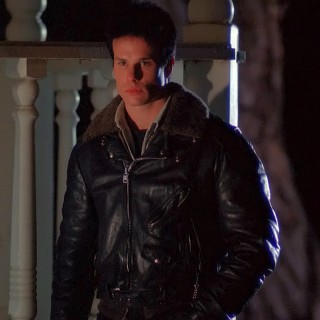 James Hurley was Laura Palmer’s secret boyfriend. He loves riding his bike. Sometimes riding at night, James punches off the headlights, rolls the throttle and just rockets blind into the dark. James Hurley lives with his uncle who owns Big Ed’s gas station.  Click to read more and comment »