“I told you to mind the store, Leo, not open your own franchise!”

Hank Jennings once was a member of the Bookhouse Boys, in fact “one of the best” according to Sheriff Truman. At one point he got expelled for his criminal activities. Now he’s the convicted husband of Norma Jennings, the owner of Twin Peaks’ Double R Diner.

At the time of the Laura Palmer murder, Hank Jennings is due for parole after serving 18 months in jail for his involvement in a drunken driving accident.

Although Hank’s wife Norma feels lied to and betrayed by her husband, she gives a positive testimony at the parole hearing, ensuring Hank’s release from prison.

Little does Norma Jennings know but Hank used his apparent involvement in a drunken driving accident as an alibi for the night of Andrew Packard’s death.

“Sitting in that concrete box all that time, 90 grand seemed like all the money in creation.”

After his release, Hank Jennings threatens Josie, who had agreed to pay him $90,000 upon his release. Hank tries to extort more money from her but Josie Packard sends her Chinese assistant Jonathan to make Hank change his mind.

Leo Johnson takes care of Hank Jennings’ business during Hank’s imprisonment. Although he is not a big fan of Leo Johnson – who shows up in a red Corvette at a supposedly discrete meeting – Benjamin Horne has to depend on Leo’s services for burning down the Packard Saw Mill.

As planned by Benjamin Horne, it is Hank’s phone call that moves Catherine Martell to the sawmill shed just seconds before it goes up in flames.

Less than an hour later Hank Jennings shoots Leo Johnson, who he thinks is “chopping wood inside his house”. Hank couldn’t risk going inside Leo’s house, police patrols were nearby.

The truth is that Leo Johnson was swinging an axe at Bobby Briggs who he found looking for Shelly when he returned from setting fire to the saw mill.

Benjamin Horne orders Hank Jennings to cross the Canadian border and follow agent Cooper who is sent out with the ransom money for Audrey Horne’s release from One Eyed Jacks. Hank needs to bring back Audrey and the money when agent Cooper gets killed by Jean Renault.

The plan doesn’t go as foreseen. Cooper manages to escape with Audrey and the money. Hank is apprehended by Jean Renault, who ends up using him to arrange a “friendly” takeover of One Eyed Jacks from the current owner Benjamin Horne.

Later Hank Jennings becomes involved in Jean Renault’s drugs trafficking and gambling business. He even persuades Ernie Niles, a former jail buddy and soon-to-be father in law, to take care of Renault’s money problems. It all ends badly after Ernie Niles is arrested for dugs possession and talked into wearing a wire to a drugs stakeout.

Hank Jennings’ final offer: An alibi in return for a divorce

“Fine. Go ahead. I’ll never grant you a divorce. You’ll be Big Ed’s whore for the rest of your life.”

When Bobby Briggs tells Sheriff Truman what he witnessed lying on the floor of the Johnson’s house dodging Leo’s axe swings, it’s over and out for Hank Jennings.

In a final attempt to stay out of jail, Hank asks Norma to give him an alibi for the night Leo Johnson got shot. In return he will sign the divorce papers so she can marry Ed Hurley.

When Norma refuses, Hank Jennings aggressively shouts out: “You’ll be Ed’s whore!” But Norma has made her choice and doesn’t give in: “I’d rather be his whore than your wife!”

“Haven’t seen you for a while, Norma.”

“I’ll change. I swear on my life. I have changed. Give me a chance to prove it to you.”

“I told you to mind the store, Leo, not open your own franchise!”

“Sitting in that concrete box all that time, 90 grand seemed like all the money in creation.”

“Fine. Go ahead. I’ll never grant you a divorce. You’ll be Big Ed’s whore for the rest of your life.”

From Diane’s file on Hank Jennings 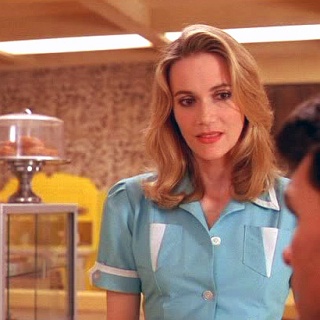 Norma Jennings is married to Hank Jennings but has a secret affair with her high school sweetheart Ed Hurley. She owns and runs Twin Peaks’ Double R Diner.  Click to read more and comment »