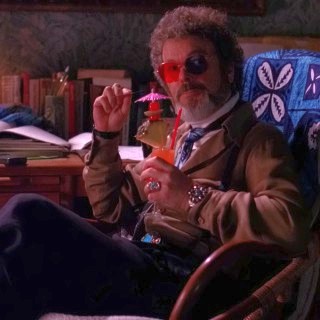 “The problems of our entire society are of a sexual nature.”

Lawrence Jacoby is Twin Peaks’ highly eccentric psychiatrist. Born January 30, 1934, Jacoby grew up in Hawaii. He observes his surroundings through glasses of which one lens is blue, the other red. His unique clothing style features a wide range of Hawaiian shirts, ties, suspenders and vests.

Dr. Jacoby is married to a Hawaiian woman. He keeps cocktail umbrellas marked with dates of influential events that affected him.

Laura was a patient. Her parents didn’t know

Laura Palmer was Jacoby’s patient. Because of their professional relationship, Doctor Jacoby has a unique insight into Laura’s personality.

It was her, you see, the necklace: A divided heart. Laura was… – was in fact, well she was leading a double life. Two people.

Doctor Jacoby takes the half-hart necklace after having witnessed James Hurley and Donna Hayward burry and hide it from the police. James and Donna later retrieve this necklace when breaking into Doctor Jacoby’s house.

James Hurley, Donna Hayward and Maddy Ferguson discover that Laura made a series of audiotapes to Dr. Jacoby. She tells him some of her dreams and nightmares.

James, Donna and Maddy hatch a plan to lure him away from his office. They dress up Maddy to look like Laura, film her and send Doctor Jacoby the video tape. Their plan works. Dr. Jacoby leaves his house and drives to the gazebo that he recognized on the video.

At Dr. Jacoby, James and Donna find a new audio tape and the half hearth necklace that disappeared after they burried it.

While watching Maddy dressed up to look like Laura at the gazebo, Doctor Jacoby is attacked and beaten by a masked figure provoking a heart attack.

At the hospital in intensive care, heavily sedated, Doctor Jacoby witnesses Jacques Renault, the suspected murderer of Laura Palmer, being strangled. Dr. Jacoby recovers and returns to Twin Peaks to help out patients.

Laura had secrets and around those secrets she built the fortress that, well that in my six months with her, I was not able to penetrate and for which I consider myself an abject failure.

In her audio tapes to Dr. Jacoby Laura Palmer talks about a “mystery man” who can really light her F-I-R-E. Dr. Jacoby never found out who that man is.

Dr. Jacoby helps out Sarah Palmer, who suffers a lot from her loss.

When he sees Bobby separately, he questions him about his relationship and first sexual encounter with Laura.

Johnny Horne, he’s got emotional problems – it runs in the family

Lawrence Jacoby helps out with preparing Johnny Horne to go to Laura’s funeral.

Nadine’s husband is having an affair with another woman. After a suicide attempt Nadine Hurley is counselled by Dr. Jacoby.

Some time after Laura got killed, Benjamin slips into a severe depression. He has a nervous breakdown and his behaviour becomes particularly bizarre. He thinks that he is a Civil War general, leading the South in a victorious campaign against the North.

Dr. Lawrence Jacoby, theorizes that Benjamin Horne is at least partially aware of reality, and that his fantasy is an attempt to reverse his recent misfortunes.

Who attacked Doctor Jacoby at the gazebo?

It’s unclear who attacked Lawrence Jacoby at the gazebo. The attacker was a masked figure that wore gloves. Was it Laura’s killer? Or did it have nothing to do with Laura’s murder? And what were the reasons for this attack?

The Twin Peaks’ Sheriff’s department were unable to come up with a satisfying answer to these questions. It’s possible the attacker was not after Doctor Jacoby but wanted to get to Maddy, who had the luck to be picked up by James Hurley before the attacker could get to her.

“The problems of our entire society are of a sexual nature.”

“Laura had secrets and around those secrets she built the fortress that, well that in my six months with her, I was not able to penetrate and for which I consider myself an abject failure.”

“Let’s not talk about you or your parents anymore. Let’s talk about Laura.”

“It was her, you see, the necklace: A divided heart. Laura was… – was in fact, well she was leading a double life. Two people.”

From Diane’s file on Dr. Jacoby