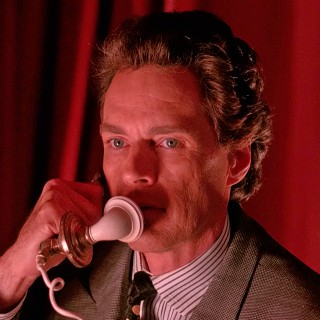 “Sometimes the urge to do bad is nearly overpowering.”

Ben Horne is without a doubt the richest man in Twin Peaks. According to Sheriff Truman he owns half the town. Benjamin Horne has a wife Sylvia, a son Johnny and a daughter Audrey.

He is the owner of The Great Northern Hotel which he and his brother Jerry inherited from their father Joseph Horne who established the hotel in 1927. Benjamin Horne owns and runs Horne’s Department Store, the only department store in Twin Peaks.

In 1989 Twin Peaks’ business magnate Benjamin Horne has big development plans. He wants to take over ownership of the land on which the Packard mill sits and turn it into a luxury country club and estates. There is a group of Norwegian investors who want to pay big money for the quality of air and life that Twin Peaks has to offer.

Catherine is married to Pete Martell but sees Ben Horne on the side. By conspiring with Ben Horne, Catherine hopes to regain the Packard land property from Josie. They begin to plot the mill’s bankruptcy in order to force Josie to sell the land to Ben Horne’s Ghostwood Development Project.

I’m going to go give ‘little Elvis’ a bath.

On Ben Horne’s advice Catherine begins to keep a separate account ledger for the mill, one that hides the fact that it is sinking slowly into bankruptcy, so Josie won’t be able to intervene in time.

Little does Catherine know, but Josie Packard has already approached Ben Horne with an offer he finds more lucrative. He begins to double-cross Catherine. The plan Josie proposes includes the sale of the mill and Packard lands cheaply to the Ghostwood Development Project.

Josie promises Ben Horne that he will get the Packard lands at the price of $5,000,000 after the mill is devastated in a fire. For this, Horne helps Josie to find an arsonist by contacting Leo Johnson who sets the Packard mill on fire with Catherine inside.

To make even more money, Benjamin Horne and Josie Packard set up a $1,000,000 worth life insurance policy, behind Catherine’s back, naming Josie as her sole beneficiary.

Though largely successful, this part of Ben and Josie’s stone cold plan didn’t work out. Catherine went missing after the mill’s fire but her body was never retrieved. Also the insurance policy didn’t get signed by Catherine, who got suspicious when her insurance agent showed it to her.

No one in town knew, but for some years Benjamin Horne, one of Twin Peaks’ most respected citizens, owned a casino/brothel just over the Canadian border.

As a matter of fact when important business deals needed to be signed Ben Horne liked to invite over foreign investors to One-Eyed Jack’s where they could have fun “on the house”.

“If you ever pull another stunt like that, you are going to be scrubbing bidets in a Bulgarian convent.”

It is Ben Horne’s daughter Audrey who’s first to discover her father is the owner of this sinister establishment. In an attempt to help out her beloved agent Cooper, Audrey Horne infiltrated One-Eyed Jack’s via Horne Department Store’s perfume counter where, as she found out, both Laura Palmer and Ronette Pulaski had worked.

As the owners of One-Eyed Jack’s, Ben and Jerry Horne had a fifty percent chance of being first in line with any new girl freshly recruited from the perfume counter at Horne’s Department Store.

Audrey Horne discovered more than she bargained for when her father turned out to be her first client at One Eyed Jack’s. Luckily Ben Horne got called for by his brother Jerry because of a business problem just before he could remove the mask Audrey was wearing.

When agent Cooper brings home Audrey after her rescue from the brothel, Audrey confronts her father with what she knows. Benjamin confesses he has been the owner of One-Eyed Jack’s for some years. Laura Palmer worked there but only for a short time. He didn’t know. Ben claims he loved Laura who he had been sleeping with for a while.

Audrey tells agent Cooper what she learned about her father. Audrey’s revelations about Benjamin’s Horne’s secret activities considerably advance Cooper’s murder investigation. Her plan succeeds: helping out the man who she has a crush on.

[To Audrey] “Laura died yesterday. I lost you years ago.”

[To Audrey] “If you ever pull another stunt like that, you are going to be scrubbing bidets in a Bulgarian convent.”

[About Leland] “Get Jacoby. Get a net. But get him out of my life.”

“Agent Cooper. Let me give you the best advice that you’re gonna get all week. Men fall under the spell of Audrey’s charms like ducks in a shooting gallery.”

“Would you like us to hum? A Tibetan chant, perhaps?”

“Admiration is for poets and dairy cows, Bobby.”

“Sometimes the urge to do bad is nearly overpowering.”

From Diane’s file on Benjamin Horne