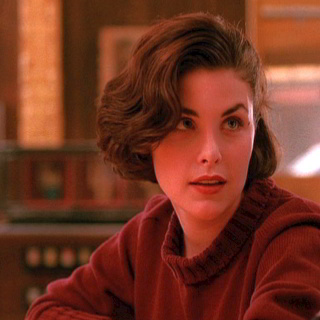 “You know, sometimes I get so flushed, it is interesting. Do your palms ever itch?”

Audrey Horne, a beautiful high-school girl with a crush

Audrey Horne is a charming yet greatly inquisitive high school student, of some renown. Next to being president of the Twin Peaks High School French Club, she’s also the daughter of Benjamin Horne, the town’s business magnate.

Although she and Laura Palmer were no friends, Audrey Horne takes it upon her to help solve her murder, only to discover more than she bargained for.

While her only other sibling, Johnny Horne, is developmentally-disabled, Audrey is Benjamin Horne’s truly troublesome progeny. She’s labelled a troublemaker and takes pride in living up to that expectation.

Like when derailing a business deal of her father, by interrupting a meeting only to loudly announce Laura Palmer’s murder to a group of Norwegian investors.

At the cost of losing millons of dollars of investment money. Audrey’s father is outraged and claims “Laura died two days ago. I lost you years ago.”

I’m Audrey Horne and I get what I want.

Dale’s good nature and kind character brush of on love-struck Audrey. During the course of the events in the small town she develops from a salacious and devious girl into a young adult businesswoman who aspires to do good.

Audrey Horne takes interest in, and becomes a key participant in, her father’s ventures, showing great loyalty to the family’s interests.

Audrey admittedly kind of liked Laura Palmer for tutoring her brother Johny three times a week. But her highly inquisitive nature, and having none other than Dale Cooper leading the investigation on Laura’s demise, are probably far more important causes for her own investigation into the town’s most recent murder.

A perfume saleswoman and a brothel

[“The owner was a little disappointed in your performance last night.”]
“Well, the owner isn’t exactly my type.”

A job at the perfume counter of her father’s department store turns out to be her ticket into a Canadian brothel, One-Eyed Jack’s.

A neat trick with a cherry stem lands Audrey Horne a job as a hostess, jeopardizing her life, but successfully disentangling some of the town’s, and more profoundly disturbing some of her own family’s secrets…

Her time at the brothel however pays off, as she finds evidence to exonerate Cooper of charges pressed after his raid on One-Eyed Jack’s, and so she gets to save her savior.

The experience progresses Audrey’s blossoming into a young adult businesswoman. She starts to display extreme loyalty to the family’s interests. She’s even loyal enough to enter the Miss Twin Peaks beauty pageant at Benjamin’s request.

At the pageant Audrey Horne delivers a heartfelt speech on saving endangered species – which also happens to further some of Benjamin’s business goals.

And for all of the sultry image that Audrey projects at the brothel, she turns out be very innocent.  In fact: she later reveals to still be a virgin!

Unfortunately she’s very present and very close by when Thomas Eckhardt’s safety deposit box is opened, and the vault is engulfed in the resulting explosion. Did she survive the blast?

“What a gyp. Finally meet the man of my dreams and next thing I know he’s on a plane to Brazil.”

Audrey developed a crush on Dale Cooper and fantasizes that he will take her away on a “life of mystery and international intrigue”. While Cooper is admittedly charmed by Miss Horne’s advances, he makes it very clear that there is difference between what he needs and what he wants.

Cooper later admitted to Audrey Horne that he did not accept her advances for her own safety. A young women he had loved during a previous FBI case was murdered to get to him.

Audrey Horne later goes on to flirt with Bobby Briggs and ultimately finds love with one of Benjamin’s business partners: John Justice Wheeler, to whom she seemingly lost virginity.

“I’m Audrey Horne and I get what I want.”

“You know, sometimes I get so flushed, it’s interesting. Do your palms ever itch?”

[Saying goodbye to John on the runway next to John’s airplane] “I am a virgin!”

“What a gyp. Finally meet the man of my dreams and next thing I know he’s on a plane to Brazil.”

From Diane’s file on Audrey Horne